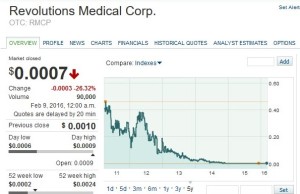 On February 9, 2016, the U.S. Attorney Office for the District of South Carolina filed criminal charges against Rondald Wheet and Byron “Scott” Key for conspiring to commit securities fraud and to defraud the U.S Securities and Exchange Commission (SC). Key was also charged with money laundering. Wheet was the Chairman and Chief Executive Officer (CEO) of Revolutions Medical Corp. (RMCP) and Key was the Investment Relations Representative for the company when the alleged crimes were committed. According to the indictment, Wheet and Key used fraudulent consulting agreements to sell shares of RMCP stock to investors. The false consulting agreements allowed the company to raise capital without going through the normal registration process with the SEC. This allowed the company to sell registered securities to investors which the investors could freely trade upon its issuance from the company. Wheet and Key are alleged to have also filed false Forms S-1A with the SEC. The indictment further alleges Key was issued a bogus consulting agreement in a nominee name so he could purchase 380,000 shares of RMCP stock for $95,000. The indictment can be read at the attached link: Wheet and Key Indictment

Many investors were taken in by lofty promises that RMCP stock shares would soar to great levels resulting in substantial gains for investors. The sad reality is the current value of RMCP stock is only a fraction of a penny – essentially a worthless stock.

Many investors could have prevented this loss by doing some simple due diligence checks of Wheet, Key and the company. For example, if investors had done a Broker-Check inquiry of Wheet and Key on the FINRA (Financial Industry Regulatory Authority) website, they would have learned that Wheet had a previous complaint filed against him and that Key was permanently barred from acting as a broker or otherwise associating with firms that sell securities to the public. Although he was barred from being a broker, he sold stock on behalf of Revolutions Medical.

The Broker-Check inquiry is free to the public and can be done at http://brokercheck.finra.org .

Additionally, investors could have reviewed the company’s financial statements publicly available on the SEC’s website at https://www.sec.gov/edgar/searchedgar/companysearch.html for critical warning signs of the company to include:

By all accounts the only money coming into the company was from investors. So with no sales revenue, investor funds were used to pay Wheet’s generous salary, the company’s lease payment which ultimately made it way to Wheet, and to pay the company’s large debt. Wheet and Key got paid but what about the investor still holding the stock today?

Simple due diligence could have alerted investors of the perils that awaited them by investing in Revolutions Medical. Quick Group, LLC has experienced and trained investigators who can provide financial due diligence. Before investing your hard-earned money in speculative investments or stock purchases, contact Quick Group so we can vet the individuals you are dealing with and the investment you are about to make to help prevent you from holding a worthless investment or stock.